Best Green Coffee Beans (The Best 10 Unroasted Beans)
Instant Coffee vs Espresso. Which One Is Best For You? (All Differences Explained)
Coffee Food Pairing: 10 Food Choices That Go Really Well With Your Coffee.
Can You Burn Coffee? And How You Can Avoid It
Best Chocolate Covered Espresso Beans (The Best Coffee Beans to Eat!) Ethiopia is no stranger to the production of coffee. They’ve been producing coffee beans for well over hundreds of years. This alone makes drinkers worldwide take an interest in the types produced in this African country.

Ethiopia is widely claimed for being the original source of coffee beans. Ethiopian coffee beans are known for their complex, distinct flavors, and taste. Farming doesn’t rely on one growing area only and this accounts for the different types of coffee beans grown here.

Read on to find out what makes this coffee one of the most sought after coffee by lovers of this brew around the world.

The coffee bean industry is one of Ethiopia’s key role players in its economy. In fact, it adds up to more than half of the foreign income coming into the country. For that reason, local farmers pay a lot of attention to the quality of their coffee beans. And, they’re constantly striving to maintain the high standards expected of them.

Did Coffee Really Originate in Ethiopia or is it Only a Legend?

It’s not really known if it originated in Ethiopia or not. But legend claims this land to be the birthplace. And, the story goes like this.

Many centuries back, around 1671, a goat herder noticed his goats feasting often on the berries of a particular tree. They were always energetic after eating these berries and it got the herder thinking.

He decided to share his thoughts with the monks at a local monastery. They tried out the berries themselves and realized the potency of this drink. It wasn’t long before stories of this energizing drink spread.

The Arabica bean is believed then to have originated from Ethiopia. Others will argue that it was discovered way before in Yemen. It’s also been recorded that slaves were already chewing on this bean when moving from Kaffa to Harrar and Arabia.

Whatever the legend, it has meant this territory is home to a range of Arabica coffee beans. And, to this day it’s one of the popular coffee beans enjoyed by connoisseurs around the world.

Why is Ethiopian Coffee Important?

The most important fact, besides its exotic fruity, floral flavoring is the contribution it makes to the nation’s economy.

Accounting for up to 3% of the world’s production, Ethiopia plays an important role in the global market. Latest statistics show that exports account for 29% of the total value of exports.

The U.S. has been the fourth-largest buyer in recent years. It is estimated the export to America reaches $120 million. The latest figures indicate up to 450 000 metric tons of coffee being produced in this part of Africa.

These same statistics and reports indicate well over 15 million Ethiopians are being supported.

Being Africa’s top producer of coffee, far exceeding the amount of export from Kenya, Ethiopian coffee is not only for export but it’s consumed by their own people too. It’s estimated over 1500 square miles is used to cultivate coffee trees. Many small scale farmers are responsible for growing the vast majority. To date, they continue to do everything by hand, from cultivating to drying.

The coffee market is heavily regulated by licenses and managed by the Ethiopian Tea and Coffee Authority. Their role is to guide, empower, and protect the making of coffee in the different parts of the land. Their intention is to benefit the farmers, stakeholders, and cooperatives at all levels.

Farmers deliver their cherries to local mills, where the wet washing process takes place. From here, the coffee beans are delivered to warehouses. Grading takes place according to the area it’s grown, defects, sizing, and cupping quality. From the cooperatives, the green coffee beans are sold to exporters in the country. Who then arrange to sell, wholesale, to countries around the world.

Ethiopian Coffee Regions and the Home of Yigacheffe Coffee Beans

One of the reasons for this coffee being so famous is the regions they grow in. When coffee drinkers hear the words “Ethiopian” they often immediately think of Ethiopian Yirgacheffe. That’s fair enough considering it’s one of the better-known coffees from this area.

Each coffee growing area has its distinct features which make its coffee beans unique (such as the Yirgacheffe). The three main regions are Sidamo, Genika, and Harrar.

The following gives you more detail about the coffee grown in Sidamo:

The coffee grown in the Genika region is typically Arabica. It’s exclusively grown in the Bench Maji Zone of Ethiopia. The district is known as Guraferda and so when you hear of “Ethiopia Guraferda” coffee, know it’s grown in Genika.

This region is characterized by rain forests and coffee forests. The grey coffee beans are known for their deep, spicy wine or chocolate-taste and hints of florals.

This Harrar area is found in the Eastern Highlands of Ethiopia. It’s one of the oldest growing areas in the land. And, it’s well-liked for its fruity, wine flavour. It has medium levels of acidity and a full body. The greenish-yellowish, medium-sized beans are sorted and dry-processed by hand.

The coffee beans are graded into the following categories:

The beans are a combination of citrus, deep wine, or chocolate and spicy notes imbued with distinctive florals. Each region mentioned above produces its own unique flavors and taste.

When drinking it, you can expect:

Dry processing was the most common form of processing until wet processing was introduced to producers in later years. Roasting is only done in small batches and in order, to prevent the bean from losing its freshness and high quality.

You can’t buy Ethiopian coffee beans without knowing about the coffee ceremony performed by the local people. This ritual was first performed by the people of the southwestern district of Ethiopia. It’s carried out by the women of the home and is done for many reasons such as honoring visitors to the household or to celebrate a special day.

Loose grass is laid out on the ground where the ceremony will take place. Bright, yellow flowers are used to decorate the ceremonial area.

Green coffee beans are roasted in a pan over an open fire until they crack. When done, they are placed onto a clay plate and carried around for each guest to inhale the freshly roasted aromas. They are then ground, by hand, with a mortar and pestle. When ready, it is poured into small, porcelain cups known as sini. These handless cups are placed onto a wooden tray and with dexterity, the host pours the coffee from the jibuna a foot above the cup in one, continuous flow.

The coffee is not served with milk but drinkers may add sugar, salt, or even butter. There are three stages to this ceremony:

This ceremony can take up to three hours and is often accompanied by ambasha, a type of traditional bread also known as himbasha.  Popcorn and peanuts may also be used as snacks.

Try out the different notes and taste of Ethiopian coffee with the products we recommend. You have a pick of ground coffee or single-serve with K-cups compatible with Keurig. Each product promises you a brew reflecting the true, high-quality bean typical of Ethiopia. 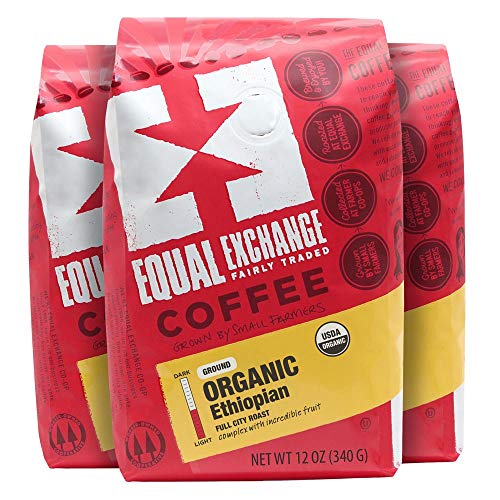 This full city roast, ground coffee is sourced from the southern region of Sidamo. The flavors are typically Ethiopian being complex, with hints of chocolate, blueberry, and ginger. The body is thick and expansive.

The coffee beans have been naturally processed (dry-processed and sun-dried). Being organic and USDA certified, you’ll find no added flavour. It is produced by small-scale farmers and collected directly from the cooperatives. 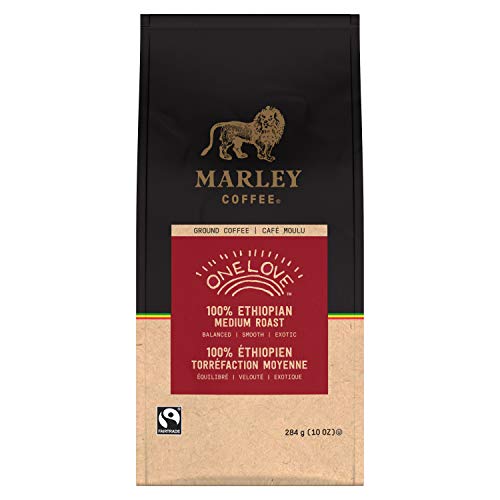 This Fair Trade Certified 100% Ethiopian coffee is medium roasted and every brew will be exotic tasting with hints of berry flavor. Expect a smooth and balanced body with this ground.

This single-origin coffee can also be purchased as whole bean or single-serve capsules. 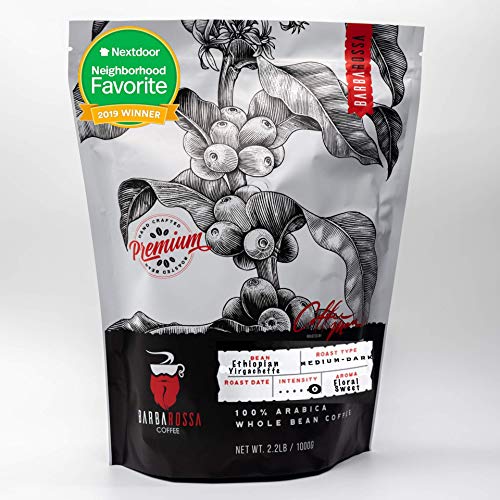 Another 100% naturally processed coffee grown in the Yirgacheffe district. Expect hints of chocolate with citrus similar to tangerine. The aroma is deep and winey with undertones of berry. The body is clean, vibrant, and smooth.

The roast is medium-dark. You’ll love this premium choice coffee beans which are a purely Arabica beans. It has a +85 cupping score.

The beans are sourced directly from the farmers and are Fair Trade certified. 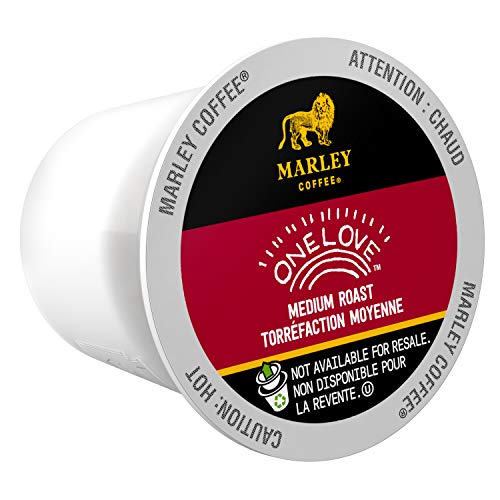 Enjoy drinking this coffee made with your Keurig. It’s Fair Trade certified and medium roasted to perfection. The coffee is consistent with hints of exotic berry.

Similar to the Marley ground and whole beans, you can expect your single-serve coffee to be smooth and balanced. 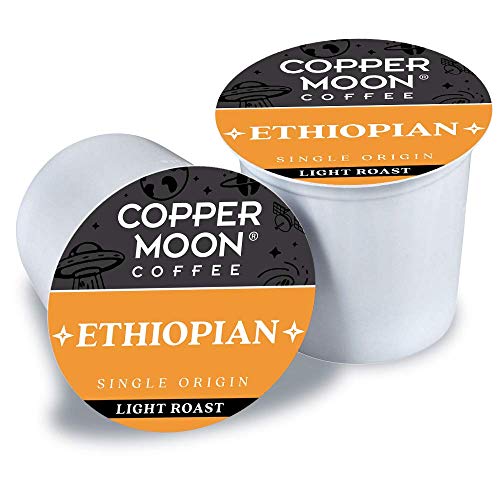 This light roast, 100% Arabica is grown in Ethiopia. The Arabica beans are full of citrus notes similar to grapefruit while having hints of nuts and chocolate. They are grown at altitudes of 1700 to 2100 meters above sea level.

The pods are compatible with Keurig and you can expect a delicate flavored, full-bodied brew with every single cup you sip on.

Steeped in a rich history with centuries of coffee growing, Ethiopian coffee is one every drinker needs to explore. Grown in ideal conditions, it is of high quality, guaranteeing an excellent brew full of exotic fruity notes, a rich and complex taste with intense aromas. And, you’ll love the smooth, deep, and balanced body.